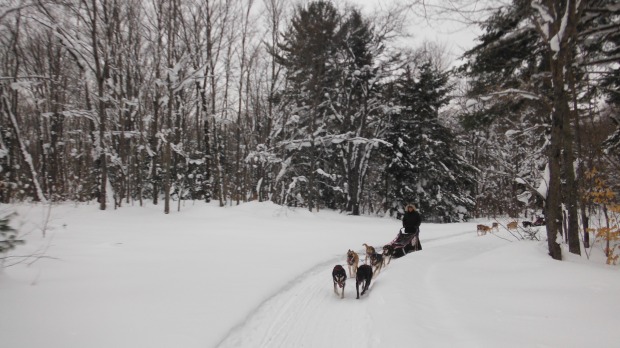 Two gals, a pick up truck and a long weekend…we were stoked to visit Nature’s Kennel for an overnight mushing adventure in the U.P. We stopped in Mackinaw for lunch at the Dixie Saloon where we were greatly outnumbered by snowmachines as our lone truck was parked outside amongst them… we were not NYC anymore, that was clear. 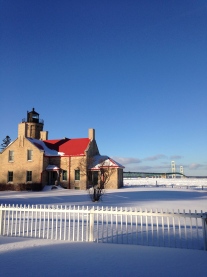 Crossing the Mackinac Bridge was the first time I had seen Lake Huron and Lake Michigan… one on either side & on a clear day it was breathtaking. Arriving at Chamberlin’s Ole Forest Inn as the sun was setting over Lake Manistique we were just in time for dinner. Walking into this inn was like stepping back in time… the hospitality, the menu, the whole setting left me feeling like I was on the set of a well staged movie.

Early the next morning we arrived at Nature’s Kennel and were greeted by Iditarod musher Ed Stielstra along with the team of humans and canines…we were stoked! We met our rockstar guides and went inside for a bit before heading out to meet the dogs and have a practice run… yes, we were going to be driving our own team of dogs! 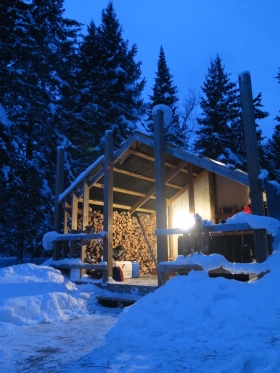 After lunch and packing our sleds for camp we headed out on a 20 mile run. It was bliss. The sound of the snow crunching under the sled, the hum of the dogs paws and jingle of the lines… this rookie musher had a feeling she was going to dig driving a sled and team and she was SPOT on.   After about 3 hours & several stops to rest the teams we arrived at camp. Straw beds & dinner for the dogs was the first order of business and then we settled in around the campfire to cook our dinner.

Warm & cozy in my sleeping bag it was amazing falling asleep to the sounds of the dogs howling in the night.

Morning came and after feeding the dogs and ourselves we broke camp and were heading back. It was a more challenging run that day but we made it back to the kennel and unhitched the team, giving lots of love to each of the dogs who had just taken us on this great adventure. 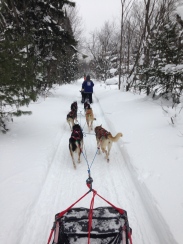 That night we were back at the Inn where we settled in for a full dinner and watching the bustle on the lake as the ice fishing shantys were dismantled and driven off by snowmachine. Other snowmachiners were coming in from their adventures and there was a harmonious hum as everyone traded stories… we sat back and surveyed the dining room taking it all in knowing our adventure was coming to an end but that we would be back again soon. 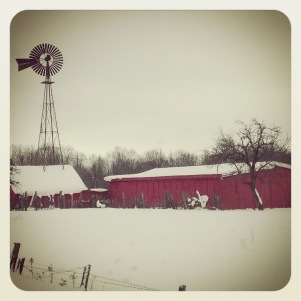 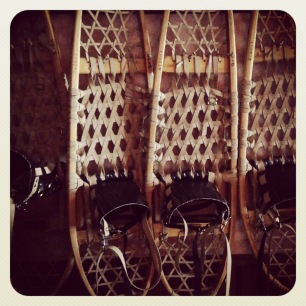 all images and artwork contained within are the property of kerry Quade and cannot be reproduced without express written permissions. @2018.